Monsignor Anthony Seba (14 November 1912–2 September 2014) died peacefully at Nazareth House, Cape Town and was buried from Christ the King Church in Pinelands on 9 September 2014. The Requiem Mass was presided over by Archbishop Stephen Brislin, and Fr Hugh O’Connor preached the homily. The funeral was well attended by priests of the Archdiocese, religious and parishioners alike.

Below are some pictures of the funeral, plus an account of his life and ministry. 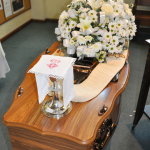 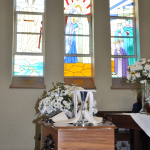 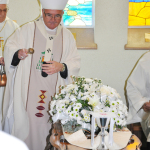 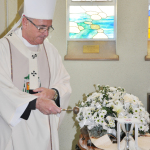 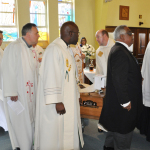 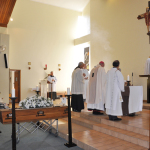 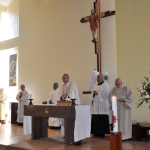 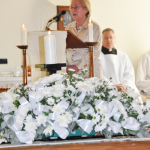 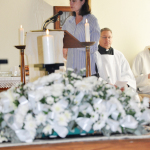 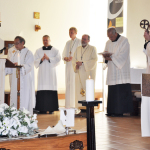 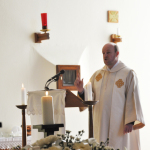 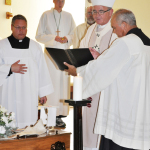 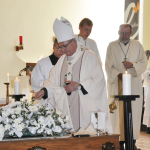 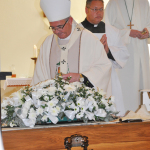 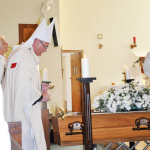 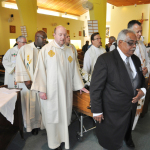 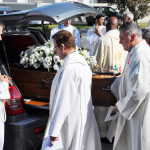 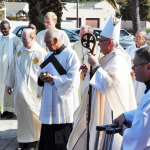 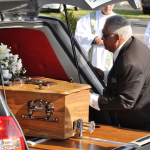 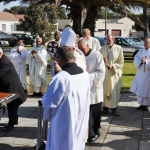 Monsignor Anthony Seba was the sixth and last born child of Hanna (John) and Miriam (Mary) Seba. He was born in Cape Town on the 14th of November in 1912 and was baptised in St Mary’s Cathedral and later started schooling with the Cabra Dominican Sisters at St Mary’s Convent School and continued his schooling with the Marist Brothers. After making his First Communion he became an altar server and served until he was accepted by Bishop Bernard O’Riley for studies to the priesthood. In 1932 he was sent to Rome to begin his studies at Propaganda Fide. Fellow students at the time included Mgr Con Lynch and Owen Cardinal McCann.

In 1938, after the completion of his studies and ordination, he returned to Cape Town as the first South African of Lebanese descent to be ordained a priest. Bishop Francis Henneman SAC, of whom he was very fond, sent him as curate to Holy Cross in Nile Street under Mgr J.Galvin.

After serving at Holy Cross for two years he was appointed as one of the curates at St Mary’s Cathedral and for the next 10 years he ministered to the people of St Mary’s, serving also as the first official Catholic Chaplain to the Roeland Street Jail.

After leaving Simon’s Town he went to Pinelands. He arrived there in 1960 and took up residence at St Joseph’s Sanatorium, now St Vincent Pallotti Hospital. The Pinelands Church at this time was in essence a Mass Centre served from the hospital. According to Mgr Seba it was only when he moved out of the hospital that the parish really came into its own.

During his time in Pinelands he oversaw the building of the hall, the purchase of the presbytery, the beautification of the grounds with the establishment of a garden planted with many of the trees and shrubs that are mentioned in the Holy Scriptures. He oversaw the renovation and extension of the church building. He secured the use of a piece of land in front of the Church which was developed into a parking area for the parishioners.

In 1977 he went to Rome to attend the canonisation by Pope Paul VI of St Charbel Makhluf, a relative of his. This brought him great joy and happiness as well as a tremendous sense of pride.

While in Pinelands he played an active role in civic, community and religious life of the suburb. In recognition of his long service to the people of Pinelands a public bench was dedicated in his honour by the municipality. The bench, which stands outside of the parish hall, is inscribed: “Donated by the people of Pinelands in recognition of service by Rev Anthony Seba, Parish Priest of Christ the King, Pinelands, 1960-1988.” During his time in Pinelands he also acted as an examiner for the junior clergy and wrote some sub leaders for the Southern Cross as well as book reviews. On occasion, with special permission, he also celebrated the Tridentine Mass.

After twenty eight rewarding years in Pinelands it was back to the seaside, for in 1988 he retired to St Theresa’s in Camps Bay. In 1992 he was made a Prelate of Honour and added the title Monsignor to his name, recognition by the Church of his long years of faithful service. He spent three happy years there but with failing eyesight it became time for another move. In 1991 he moved back to St Mary’s Cathedral. He was warmly welcomed there by Mgr Donald de Beer, and though in retirement Mgr Seba continued to assist the parish when necessary. It was at St Mary’s in 1998 that he celebrated his 60th anniversary of ordination to the priesthood while Mgr Andrew Borello was Administrator. At this celebration, quoting Marcus Aurelius he said, ”Think of what you have, rather than what you lack. Of what you have select the best. And then reflect how eagerly you have sought it, if you did not have it”. Of his priesthood he had this to say, “I cannot imagine what my life would have been without it. It has given me, even on a human level, all that I prize most. It has allowed me to develop as me. It has been an enrichment of my mind, my heart and personality as nothing else could have done. I believe that without it my life would have been an arctic waste”.

In the years that followed he moved into frail care at Nazareth House. He lived through the pontificates of Popes Pius X, Benedict XV, Pius XI, Pius XII, John XXIII, Paul VI, John Paul I, John Paul II, Benedict XVI and and died during the time of Pope Francis. In terms of the local Church he has lived under the following bishops of Cape Town: John Rooney, Bernard O’Riley, Francis Hennemann SAC, Owen Cardinal McCann, Stephen Naidoo CSsR, Lawrence Henry and Stephen Brislin. In March 2014 on the Feast of St Joseph he celebrated his 76th anniversary of priestly ordination.

Mgr Seba died peacefully in his room on 2 September 2014 at Nazareth House.